Bats and the Cocktail Party Nightmare 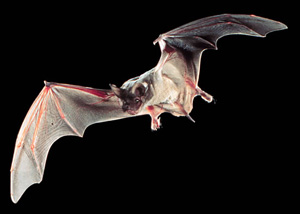 After the rodents, bats are the second largest order of mammals. In fact, around one fifth of all mammal species are bats. They inhabit every continent except Antarctica (the presence of encircling seas not having deterred them from reaching Australia as it has most other placental groups), and all but the coldest of habitats. Unless you happen to live in, say, Iceland, there are probably bats of some sort living not too far away from you.

And, yet, we don't know as much about them as we do most other broad types of mammal. They're mostly nocturnal, they fly about where it's difficult to spot them, and they tend to sleep in some pretty inaccessible places. That most people don't find them very cute and cuddly probably doesn't help much.

But, of course, they are pretty cool animals, when you think about it. The whole flight business is fairly remarkable, and has only been achieved on three other occasions in the entire evolutionary history of the animal kingdom. And, of course, there's the whole sonar business.

We're all aware that bats use sonar to find and catch their prey, and also to avoid bumping into things in the darkness. When you're flying over an open field, looking for tasty insects, this is all well and fine, but it presents problems when you're trying to do something as simple as heading out for the night. This is because cave-dwelling bats (which a great many of them are), often live in huge colonies. And when I say 'huge', I mean over a million individuals in some cases - bigger than most human cities.

All of these bats are crammed into a cave that, in all probability, only has one way out, and may not be all that wide, either. So, every evening, great clouds of bats have to emerge from their caves, and return again in the morning. Those bats are all making echolocation calls, so that each animal must be bombarded with an absolute cacophony of calls from its neighbours. How, in the midst of all that, do you make out the sound of your own call reflecting off the wall?

This problem has been termed "the cocktail party nightmare", and it's far from resolved. The answer is probably complex, involving a number of different factors. For instance, bats have rather more directional hearing than we humans, being able to swivel their large, highly mobile ears so as to pick up sounds coming only from a particular direction. They may also use the same solution that humans do when at the eponymous cocktail party: recognising the sound of their own voice as distinct from that of the others surrounding them. But the evidence for this isn't very firm, and it seems difficult to believe that it works so well when bombarded with literally thousands of other bats all shouting at once.


This particular study looked at colonies in a couple of caves in the hills east of San Antonio and Austin, Texas. The larger of these held a total of around 200,000 bats. So, around the population of, say, Newcastle. The bats emerged from this cave in three bursts, lasting from six to twenty six minutes, in vast columns where the individuals are pushed together almost wingtip-to-wingtip. This gives some idea of the scale of the "cocktail party nightmare" they must face. The other cave, while having a smaller population of only about 16,000 or so, managed to get all the bats in two bursts, totalling around eleven minutes between them. Which is still quite a lot.

The sounds they made were, as it turned out, quite distinct from those made while searching for food. They were much shorter, starting out at a high pitch, then rapidly dropping in tone. In contrast, foraging calls last longer and maintain a fairly constant pitch throughout, being used for a broad sweep to see if there's anything out there worth eating.

Being shorter may help the bat disentangle its calls from those of its neighbours. Perhaps as important, when combined with the wide range of frequencies employed during the call, this gives the bat a better idea of exactly how far away any obstacles might be, at the expense of having a shorter range. Of course, when you're emerging from a cave, not being able to detect objects further away isn't much of a problem, and, if anything, likely helps reduce confusion with objects not of immediate concern to you. In fact, these calls are similar to those employed by bats as they complete the very final part of their swoop to capture prey - when, again, exact distances are important, but range isn't.

Interestingly, the bats had slightly different calls at the two cave sites. At the larger one, the difference between the 'emergence' calls and those used while foraging were more extreme than at the other site. This could be because the much higher population density makes the short range and accuracy of the sonar pings even more important than it otherwise would be. On the other hand, the bats didn't seem to care much about just how many of their neighbours were nearby at the time, with stragglers making much the same sort of calls as those in the densest part of the emerging column.

However, only about half the calls fit this description. The others were equally short, but maintained a more constant pitch - albeit much higher than that used while searching for food. These would be even shorter range than the other calls, and their purpose isn't so clear. The authors suggest that they might be used for really close objects, such as nearby bats, while the variable pitch calls are used for things like the cave walls, that are (hopefully) further away. Another possibility is that they are, in fact, not sonar at all; instead, they might be social calls, being used for some form of communication between the bats, perhaps as a "don't bump into me" warning or for some other purpose as yet unknown.

None of which truly solves the mystery of the "cocktail party nightmare", but at least provides some new and interesting food for thought about what exactly the bats are doing.

[Pictures from Wikimedia Commons]
Posted by JK Revell at 18:32