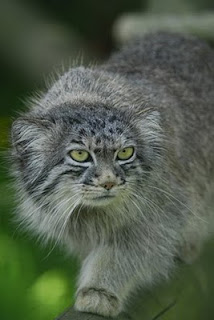 We're all familiar with the various species of Big Cat - the lion, tiger, jaguar, and so forth. However, with a few notable exceptions, the smaller wild cats are less well known. This is hardly surprising, since they are pretty good at hiding, and tend to do so at the first sign of an approaching zoologist or natural history camera team. When it comes to those that are about the size of a house cat, the words "shy" and "secretive" often spring to mind when describing them.

In fact, there are actually a large number of such cat species, found in every continent except Australia and Antarctica. Although a lot of them tend to prefer woodland - with undergrowth from which they can pounce on unsuspecting dinner - they have adapted to a surprisingly wide range of habitats, such as mountains, deserts, and swamps. In total, there are 23 recognised species that are at least approximately the size of a house cat.

The one in this picture is Pallas's cat, also called the manul (Octocolobus manul). It lives in central Asia, and can be found from northern Iran as far across as north-eastern China, taking in places like Afghanistan and Turkmenistan on the way. It likes hills and high grasslands rather than forests, using rocks and low bushes as cover while hunting.

Quite how the manul fits into the evolutionary family tree of the small cats is not particularly clear. It seems to have diverged from the others quite early on, and which other cats might be its closest relatives is a bit of mystery. Some studies suggest that it may be an early offshoot of the Felis line that led to the familiar domestic cat, others that it might be related to some of the species of south-east Asia, but its been evolving on its own for long enough that it's a bit difficult to tell.

The poor old manul has, like many cats, been hunted for its fur, and, while its not a truly endangered species it is considered "Near Threatened". Trade in the pelts is banned internationally, but this hasn't really stopped anyone. However, another possible threat to the manul comes from a danger to its food supply.

Manuls, like most small cats, primarily eat small mammals, supplemented with the occasional bird. It has to be said that there are, generally speaking, quite a lot of small mammals around, especially in the wild and remote areas where the manul makes its home. We might expect that, even if the manul normally hunts one particular kind of small mammal, it would readily switch to something else if the supply became short. Evolutionarily speaking, there are two basic strategies when it comes to food supply: you can specialise in eating one particular sort of animal, or you can go for anything you can get your claws on. The first approach has the advantage that you can evolve to get very good at catching that one thing, rather than spreading your skills like a jack-of-all-trades, but an obvious disadvantage if that animal itself becomes endangered.

So, which is the manul? A study recently published in the Journal of Mammalogy aimed to find out. The authors guessed that the manul would be a generalist, eating a range of different food, depending on what was available at the time. This would be good news, since the manul would not rely on any particular other animal for its survival. It was already generally known that the manul's favourite food consisted of small rodents and pikas. 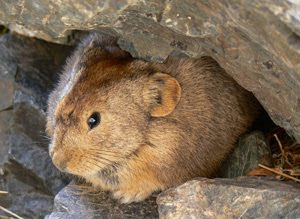 Pikas look rather a like a hamster, although they are much larger, being closer in size to a rabbit. In fact, despite their appearance, they are more closely related to rabbits than to anything else, which means that they aren't officially rodents. (Rabbits aren't rodents, either, for reasons too long to go into here). Pikas are at least the partial inspiration behind the appearance, and name, of Japanese cartoon and gaming sensation Pikachu - although they have not been observed to shoot lightning bolts.

Anyway, in order to find out more about the manul's diet, the researchers counted up the numbers of different kinds of prey animal available in a wide area of Mongolia. They then spent a lot of time collecting manul poo, drying it out in ovens, and poking about in it to see what the cats had eaten. Oh, the joys of zoological field work.

If, as they expected, manuls ate whatever suitable animals they happened to come across, the two answers should have come out about the same, and should change with the seasons, according to what was available when. In other words, whatever small mammal was most common in the area should also be the most common in the manul's dung.

But it wasn't. It turns out that the favourite food of manuls is the Daurian pika (picture above), the Mongolian gerbil, and the mountain vole. They also ate some other voles, hamsters, small birds, and a surprising amount of insects - something not previously observed. But, significantly, the manuls had eaten a higher proportion of pikas than would be expected if they just ate at random. In other words, they must have been specifically hunting for these animals, rather than the gerbils and voles. Even when pikas were relatively rare, they seemed to form a large part of the manul's diet. (They also ate more insects in winter, which, given that insects are not around much in the snowy Mongolian winter, would suggest that the cats had spent some time trying to find them).

It was also notable that the manuls had apparently completely ignored jerboas and dwarf hamsters, both of which were commonly available where they lived. This was probably because those animals are strictly nocturnal, while the manul is active either during the day, or more commonly, at dawn and dusk - but not in the middle of the night.

Manuls, it seems are specialists - they will eat pikas even when there is much more of something else available. This makes sense in a way, since there is a lot more meat on a pika than on a gerbil, meaning that the cat does not need to hunt so often. But it is significant, because pikas are considered a pest locally, and are frequently poisoned. The Daurian pika is far from being an endangered species - in fact, its better off than the manul - but such specialisation does leave the manul vulnerable to loss of its major food source, at least in some areas.

It probably wouldn't be a disaster, especially since it could catch gerbils and voles instead if it really had to, but it seems that the manul is more vulnerable to pest control programs than had been thought. And it's a cat that we know relatively little about to start with.
Posted by JK Revell at 18:27