The Intelligence of Chimps

Our closest living relatives are, of course, the chimpanzees. There are, in fact, two species of chimp: the common chimpanzee (Pan troglodytes), and the bonobo (Pan paniscus). The latter is sometimes called a "pygmy chimpanzee", although, frankly, there's not a lot of difference in size between the two species. Both species are equally related to humans, having diverged from a common ancestor less than two million years ago, long after that common ancestor diverged from the line that eventually led to us. 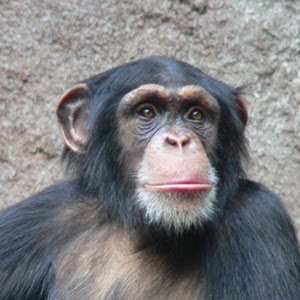 Both species live in fairly similar environments in the jungles of tropical Africa, and eat more or less the same kinds of food, so we might expect that their behaviour would also be similar. But that's clearly not the case; common chimps are significantly more aggressive than bonobos, while the latter are renowned for their frequent sexual exploits. Common chimps are also more likely than bonobos to use simple tools to extract food from difficult to reach places.

Do these differences in behaviour reflect real differences in intelligence between the two species? A recent large-scale analysis, published in PLoS ONE, aimed to find out. "Intelligence" is a fairly tricky thing to pin down, even in humans, so "which species is the more intelligent?" wasn't the sort of question that the study could answer. Rather, the researchers tested members of both species on a range of tasks designed to look at different aspects of intelligence. Would they perform the same, or would one species prove better at some tasks than the other?

Of course, the study was not conducted in the wild; the animals in question were orphans raised by humans in ape sanctuaries - their parents, in most cases, presumably having been killed by bushmeat poachers. Nonetheless, they had not previously experienced these kinds of tests, so they would have to solve the problems on their own.

For the most part, there wasn't a great difference. The researchers tested spatial awareness by placing food under cups and then rotating the table, moving the cups about, and so on, to see if the chimps could figure out where the food had ended up. Members of both species got this right a little over two thirds of the time. To test their ability to count and perform simple addition, the experimenters placed differing amounts of food under covers and watched to see which one the chimp went for first. Again, both species got this right about two thirds of the time. (This does not, incidentally, imply actual arithmetic - just that the animals could recognise that, say, six peanuts is more than three).

In tests of communication - could the chimps either understand an experimenter trying to tell them where the food was, or could they themselves indicate to the experimenter where hidden food was located - they still managed to get it right over half the time, but again, there was no difference between the two species.

The most difficult test was one in which the food was placed inside a container that required a relatively complex method to open. The researchers showed the chimp how to get the food, and saw if the animals could successfully copy them. In most cases, they couldn't - and, in previous trials elsewhere, no chimp had ever solved these particular problems on their own - although, interestingly, in both species, the females were far more likely to succeed than the males. 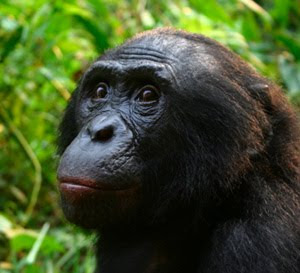 However, in tests designed to see whether the chimps could use clues to find hidden food, or could use tools to obtain food, although both species got it right more often than not, the common chimps were significantly better than the bonobos. Tool use, in particular, is something we particularly associated with human intelligence, so we might think that this makes common chimps the more "human-like" of the two species in this respect.

But, of course, using tools isn't really the be-all and end-all of human intelligence. Our ability to work together as a species relies, in part, on our ability to understand the minds of others and to bond together socially. The final set of tests evaluated the chimps' abilities to grasp concepts such as attention and intentionality. For example, a piece of food would be hidden beneath one of two cups; the chimp could not see which cup it was, but a second human could. When the second human tried (and failed) to grab one of the cups, would the chimp work out that this was because that was where the food was hidden? On this test, the bonobos did better, succeeding just over half the time.

So, given that they scored similarly on all the other tests, it seems plausible that the basic intelligence of the two species isn't all that different. Yet the way that they use that intelligence, or the particular skills that they possess, is different. Common chimps are better at physical tasks and understanding the operation of the physical world. But the peaceful and relatively shy bonobos scored higher on tests of social awareness and the ability to understand the minds of others. Both of these are important aspects of human intelligence. Our closest relatives have evolved along paths parallel to our own, and each, perhaps can show something of how we rose to our present position of power over our planet.

[Pictures from Wikimedia Commons - upper image is a common chimp, lower image is a bonobo (both males)]
Posted by JK Revell at 18:29