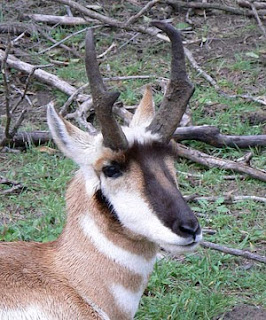 The antelopes are not a true group of animals; generally speaking, the term just refers to any member of the cattle family that isn't a cow, sheep, or goat. There are many different kinds of antelope, found not only across Africa, but also in Asia.

Under this definition, however, the pronghorn (Antilocapra americana) is not really an antelope. At first glance, this North American animal certainly looks like one, with cloven hooves, horns, and a four-chambered stomach. But a closer look reveals some differences. A look at the cloven hooves of any member of the cattle family reveals that they have four toes: two that form the hoof itself, and two smaller, vestigial ones that don't reach the ground. In the pronghorn, these evolutionary remnants have vanished altogether (although there are still cannon bones within the leg), so that they only have two toes on each foot.

The horns are different, too. In members of the cattle family they are never branched - unlike the antlers of deer - but the male pronghorn, as its name suggests, has a forward-pointing prong on each horn. Furthermore, they shed the outer layer of skin from the horns each year, like deer do, but quite unlike cattle. (Unlike deer, however, they don't shed the horn itself).

All of this places the pronghorn in a family all of its own. While the pronghorn family today consists of just one species, in prehistoric times, it was much larger, representing a branch away from the line that led to true antelopes that crossed over into the Americas, and developed on its own.


The pronghorn is not an endangered species; it is present in large numbers across a wide swathe of the western parts of the USA, and also into Canada and Mexico in places. This doesn't mean that it's had everything its own way; as with many animals in North America, and elsewhere, it used to be present in much larger numbers in the nineteenth century than it is now. But, if anything, it is more numerous now than it was at the end of that century, due in part to the introduction of such factors as regulated hunting seasons.

However, it can still be useful to look at the various factors that affect the pronghorn population, some of which can be extended to other, similar, animals. One study looked at the population of pronghorn in western Nebraska from 1953 to 1993, to see what conditions favoured the animals, and which didn't. It turns out to be quite a complex story, indicating that conservation isn't always a simple matter of fixing one or two problems and getting the same result everywhere.

One does, incidentally, have to be a bit careful with this sort of retrospective study. Because it's looking back over a long period, there might be all sorts of differences in the way that the individual studies that comprise it were conducted. Indeed, in this case, the 1993 cut-off was chosen because population studies after that date were just too different to be compared with the older ones. But, bearing that in mind, some trends do appear to be visible.

For many animals, the advance of agriculture is generally a bad thing. It disrupts the natural habitat, and leads to competition with livestock if you're a herbivore, or being shot by farmers if you're a carnivore. Pronghorns, however, don't really seem to have this problem. There is no doubt that they are more numerous in the wilder parts of their range, but, at the same time, the presence of nearby agriculture seems to help protect their population from such problems as unexpectedly harsh winters.

There are probably a couple of reasons for this. Importantly, pronghorns and domestic cattle tend to eat different kinds of plants, so that the cows aren't eating all of the pronghorns' food. Indeed, if anything, cattle grazing promotes the growth of herbs and grasses that the pronghorns can then feed on, so that in years when the cattle suffer, the pronghorns also struggle. Agriculture also increases the presence of winter wheat, and of cattle feed such as alfalfa during the harsh winter months, both of which are available for the pronghorns as well as their intended recipients.

However, an interesting thing happens when populations get very small, as happened at times for the pronghorns over the forty years examined by the study. Normally, when populations in a given area get larger, each animal produces less offspring that survive to adulthood. There is, after all, only a certain amount of food to go around, and animals are effectively competing with members of their own herd for survival. As the population shrinks, there is less stress on individual animals to find food, shelter, or other resources, and they produce more offspring.

But if the population shrinks enough, something called the Allee Effect often kicks in. Here, the usual trend of increased reproduction for reduced population density reverses, making the population dip still further. Continue this for long enough and the animal is wiped out in that area - and, if the area affected is big enough, that may even mean extinction. Perhaps the major reason behind the Allee Effect is inbreeding, due to a limited choice of mates.

There may, however, be other reasons as well. In the case of herd animals like the pronghorn, for instance, because the herds themselves will get smaller, less of the animals will be available to keep guard against coyotes while the others are feeding. We can also see this effect in play in one of the world's rarest large mammals, Przewalski's gazelle (Procapra przewalskii), which now lives only in a small area around a single lake north of Tibet (and, which, incidentally, very clearly is threatened by advancing agriculture). Now present in numbers too small to properly guard against the local wolves, they are increasingly seen sidling up to herds of the closely related, and more numerous, Tibetan gazelle, so that at least somebody is on the lookout, even if it isn't a member of their own species.

In the case of the pronghorns of western Nebraska, the population densities did, at times, dip low enough for the Allee Effect to kick in. But, in every case, the population recovered as conditions improved in subsequent years, or the hunting season was temporarily halted. So they're hardly in any danger of extinction yet. But even here, exactly how far a population has to fall before problems arise varies considerably from area to area. In this case, where agriculture is more common, the pronghorn herds could reach far lower population densities before the Allee Effect began to take its toll, but for other animals, it could be quite the reverse. And even where it isn't, it may mean that you have to take conservation action sooner in wild areas than in better farmed ones - quite the opposite of what you'd normally expect.

[Picture from Wikimedia Commons]
Posted by JK Revell at 17:49