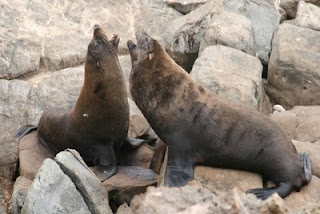 Fur seals are members of the sea lion family, and not, as their name might suggest, the seal family. One of the easiest ways to tell the difference is to check the hind flippers. In sea lions and fur seals, the flippers stick out to the sides (at least when on land), enabling the animal to waddle about on all fours, or even rear up on its hind limbs. True seals, however, are more thoroughly adapted to life in the water, and their hind flippers, while great for swimming, stick out to the rear, making them pretty much useless on land - the animal has to drag itself about using only its front flippers, and cannot walk.

Of course, the two families are related, and share a number of features in common. Some of these are related to the difficulty of breeding in an air-breathing animal that spends almost all of its time in the water. They come ashore just once a year, during which time the females give birth to their pups, and then almost immediately mate again before retreating back to the sea. As a result, gestation almost always lasts just under twelve months, regardless of species, and the animals show a great ability to synchronise their births to the same time of year.

In both groups, the males tend to be much larger than the females, aggressively defending patches of shoreline and dominating a harem of females, once the latter have finished raising their pups and are ready to mate. Their larger size, visible differences from the female (such as a sea lion's mane), and aggressive attitude all require a lot of energy, and are controlled, as in other mammals, by the hormone testosterone.

One might think, therefore, that having more testosterone is an undoubtedly good thing, if you happen to be a male fur seal - you're bigger, sexier, and more likely to be a hit with the females, and overall, end up with more children. But there could be a downside as well - you're more likely to get sick.

A couple of recent studies, published in PLoS ONE and the Australian Journal of Zoology, looked at the breeding tactics of New Zealand fur seals (Arctocephalus forsteri) at a breeding colony near Kaikoura. These are one of eight species of fur seal found in the southern hemisphere, and are actually more closely related to the sea lions than to the single northern hemisphere species.

The breeding males fell into two main groups. Around half of them followed what is, perhaps, the more obvious breeding tactic. They established patches of ground, vigorously defending them from other males, and gathering harems of up to fifteen females each. New Zealand fur seals are, compared with some of their relatives, not especially aggressive - they are more likely to posture, shout, and threaten than to physically attack their rivals, but even so they spent a lot of time showing off their masculinity. These were, as might be expected, the bigger, more muscular males - presumably the sort that the females tend to fancy. And, as a result, they got to have a lot of sex.

However, nearly as many adopted a quite different tactic. They tended to spend only a couple of days at the breeding site, wandering about and looking for a good opportunity to have a quickie while the territorial males weren't looking. They were generally smaller than their counterparts, with less pronounced masculine features, and they spent a lot of time running away. A third, much smaller group, were somewhere in between, sticking to a specific area of the shoreline for a few days at a time, but not establishing long-term territories. Nonetheless, the differences in behaviour between the two main groups were quite clearly defined, rather than just being points at either end of a spectrum.

Interestingly, when it came to doing paternity tests on the pups born the following year, it turned out that about as many of them were fathered by the wandering transients as by the big, masculine males. Certainly (so far as could be determined), the transients had had sex far less often than the territorial males, but it didn't seem to make much difference to their eventual chances of fathering offspring. Which, from an evolutionary perspective, is all that matters.

New Zealand fur seals, it seems, depend on a balance between two different tactics to father offspring, with each tactic having its own strengths and weaknesses.

The researchers also studied the urine and dung of the various males. This has to be collected fresh, which isn't terribly easy when you have large and aggressive males stomping about (they weigh up to 185 kg / 410 lbs). It doesn't help that, since they are spending so much time posturing and so little time hunting at this time of year, they really aren't eating much, and consequently, don't poo very often, either. But, with due Antipodean diligence, the researchers managed to collect enough of the stuff to analyse.

Perhaps unsurprisingly, the big territorial males had much higher levels of testosterone than their wimpier cousins. But all this male hormone sloshing about and making them macho had apparently come at a price - because their dung also contained many more parasites than that of the transients. Roundworms, tapeworms, and flukes were all present, often in relatively high numbers. The price of so much masculinity, it seemed, was that they were also more likely to get sick.

Why would this be? One possibility is that, in order to bulk up their muscle, they had eaten more food before arriving at the beaches than the transients had. Since most of these parasites are passed on in food, that would mean they were more likely to get infected. But another possibility is that it's the testosterone itself that's the problem. Even assuming the parasites don't literally thrive on the hormone, its possible that because the seal's body is diverting energy reserves to building up mass, a thick and manly mane, and so on - not to mention all that exhausting posturing and fighting - they have relatively little left over to run their immune system properly.

The smaller males may not get to have sex as often, but they are healthier for it, and they seem to have just as many kids in the end, anyway. Their tactics only work because the other males are busy defending their harems, so both approaches are needed... but the big males don't get everything their own way, as casual inspection might lead one to think.

[Picture from Wikimedia Commons]
Posted by JK Revell at 18:31