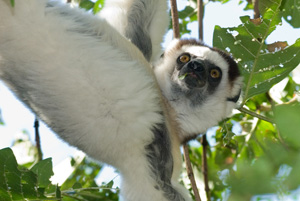 Violence towards outsiders is something observed in most primates. It can range from individual targeted aggression, through cooperate gang attacks in monkeys, to, in the case of one rather extreme species, inventing the machine gun. But, at the same time, primates are social animals, who gather together, and are pretty good at cooperating even when it doesn't involve beating the crap out of somebody else. Where does that come from?

At its very base, the primate evolutionary tree divided into two lineages; one leading to the monkeys (and us), and another consisting of what might be termed "lower primates". That's not a terribly good term, since they have, of course, been evolving for just as long as we have, and are perfectly well adapted to their environment... but it's easier to spell than "strepsirrhine". To understand what the first primates may have been like, its useful to see what this group have in common with our own lineage.

A recent study took the unusual step of analysing playful behaviour in Verreaux's sifaka (Propithecus verreauxi), one of nine species of sifaka. They belong to the woolly lemur family, and, like all lemurs, are found only in Madagascar. Madagascar has been separated from Africa for a long time, and just as Australia preserved its marsupials, this isolation preserved a number of interesting animals no longer found elsewhere, of which the lemurs are just one of the more obvious examples. Indeed, the other members of the woolly lemur family are not themselves particularly well known.

Young primates, like those of many other mammals, are often seen playing. Of course, their games don't have defined rules in the ways that many of ours do, but are made up on the spot, as those of young human children often are. Their purpose seems to be to help develop both motor and social skills, and to practice things they will have to do for real as adults. Baby sifakas, unsurprisingly, play quite a lot.

We're not talking about that sort of playing.

No, what was relevant to this study - and has rarely been looked at before in any non-human species - is play among adults. Adult sifakas don't play as much as the young, but they certainly do play with each other from time to time. They're already skilled enough at what they do, so we can't assume that they're doing it for the same reasons as the young. So what is the reason?

The researchers looked at how often the adults played, who they played with, and what sort of games they played. Sifakas were particularly useful for this study, not just because they are good example of a non-simian primate, but because they live in small groups of up to twelve individuals with a somewhat fluid composition. Many other lemurs are either solitary, or live in tight-knit xenophobic groups that rigorously chase off intruders.

The core of the sifaka groups are the females, who, as in many mammal species, tend to stay with their families. Males, on the other hand, wander between groups, enabling them to find mates to whom they are not related. Finding a group at just the right time is important to the males, because the females only come into heat once a year, and then only for three days at a time. Under those circumstances, you'd better make friends with a new female pretty quickly, and hopefully avoid being beaten up by any male friends she already has.

While the presence of males is pretty useful to the females, it's rather a double-edged sword for any males currently in her group. Although having rivals for the affections of a female is obviously a bad thing, the more males are around, the better able the group is to watch out for danger, or for other animals trying to pinch their food supply. And it was the reaction of males to outsiders that turned out to be key.

It seems that adult male sifakas by and large don't play with individuals they already know. Instead, when they play, they do so with males from other groups who come nosing around. This is very different from grooming behaviour, where the adults pet each other and cement their social bonds. Males generally don't groom other males that they don't know, and are noticeably more likely to groom their friends if they think a stranger is watching. Grooming seems to be saying to outsiders "he's my friend, and you're not"; a means of social exclusion, and is therefore obviously different from playing.

The females, on the other hand, didn't seem to care much which males they played with. This was actually a little surprising, since in some primate species, play seems to form part of courtship. But female sifakas, it seems, would much rather their males are good at grooming and scent marking than at playing games.

What was significant however, was what happened after play between males. Whereas normally they chase of intruders, after playing with them for a little while, the males seemed to accept the strangers, and stopped fighting with them. It didn't really matter who started the game - and both strangers and those already in the group were equally likely to do so - once they'd played together, males could accept strangers as "one of them", at least temporarily.

In effect, the games are a sort of "ice-breaker" to get the male sifakas used to each other.

There was also a difference in the type of games they played. On the rare occasions when males chose to play with individuals from their own group, the games consisted of pushing, pulling, gentle wrestling, dangling from branches, and pretending to bite each others' genitals. (This last one may not sound much fun, but apparently it's really entertaining if you're a sifaka). But when they met strangers, the games tended to get rougher, with mock fighting, more vigorous wrestling and so on.

[Although they're rather slow to download, you can view videos of "rough play" here, and of gentler play here]

These mock fights were almost always short, and certainly differed from the outright aggression that males display when driving each other off. By keeping it short, they were probably able to emphasise "this is just a game". If anything, when they did play roughly with individuals they knew, the games went on for longer, presumably because they already trusted each other. But by playing such games with strangers, they were able to get a better idea of the capabilities of the outsider, and perhaps also to tell how committed they could be to future friendship.

So, in short, playing games is a useful social glue among adults, especially as a way of getting to know people you aren't very familiar with. It promotes trust, and reduces costly and pointless aggression. Which has to be a good thing.

[Picture from Wikimedia Commons]
Posted by JK Revell at 13:29